The COVID-19 pandemic that occurred throughout the world had a big impact not only in the economic sector but also in the social sector. To raise awareness and discuss the issue of potential social impacts that occur in Indonesia,IBCSD) held a Webinar with the theme “NO ONE LEFT BEHIND, Private Sector and Government Synergy for Social Welfare” on Thursday, (9 / 7/2020). 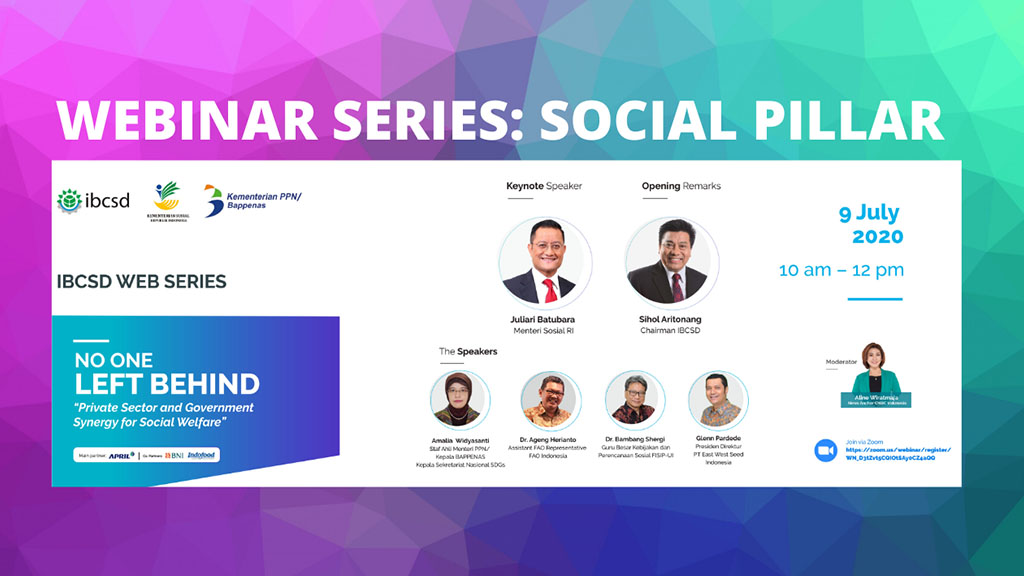 Sihol Aritonang, Chairman of the IBCSD, stated that to achieve SDGs by adhering to the principle of “No One Left Behind”, the business sector has a very important role in encouraging community empowerment and social equity.

In this new normal era, according to Sihol, leadership and collective action in the business sector are needed in the recovery of social impacts given the number of advantages it has such as job creation, technology development, innovation and investment. The business sector can also play a role in overcoming negative environmental and social impacts through their business value chains and supply chains.

The “No One Left Behind” global goal can be achieved if all parties involved, including the private sector, contribute together to achieve the SDGs goals. IBCSD will continue to collaborate and request the direction of the government, including the Ministry of Social Affairs and Bappenas in order to continue to play an active role in advancing the global agenda and encouraging social equity, “said Sihol when giving a speech.

Collaboration between business and government according to the Minister of Social Affairs Juliari Coal can be done through support for the Poverty Reduction Strategy with support for the implementation of the Stimulant Assistance for Business program that is accessible to the public, including KUBe and Social Entrepreneurship as well as other funding schemes for Business Development such as the Government Investment Center, People’s Business Credit, Ultra Micro Credit, Mekaar PNM and so on.

“The Indonesian government has prepared a policy framework that supports government and private partnerships in the distribution of non-cash social assistance through Presidential Regulation No. 82 of 2016 concerning the National Financial Inclusive Strategy which states that efforts made in the distribution of social assistance programs are carried out in non-cash, as well as with the Presidential Regulation No. 63 of 2017 concerning the Potential for the Implementation of Social Welfare and Poverty Alleviation “, said Juliari Coal in her keynote address.

A number of actions have been taken by the private sector so far in achieving social welfare in line with the achievement of the SDGs. In the financial sector, companies engaged in the banking sector can play an important role such as that carried out by Bank Negara Indonesia (BNI) with the Let’s Save with the Waste Bank Movement.

In his presentation, BNI Consumer Funding VP Rizwan Nazaruddin said the Let’s Save with Waste Trash Movement was a continuation of the pilot project that had taken place since 2018 in the administrative cities of West Jakarta and North Jakarta. As of September 2019, this movement has been attended by more than 150,000 students and 5,000 citizens and orange troops, more than 200 garbage banks with a total fund raised from sales of more than Rp 3 billion.

Another example is the School Improvement program of pulp and paper producers, the APRIL Group which aims to improve the quality and infrastructure of schools in achieving the goals of SDGs # 4 Quality Education. With this program, communities around the company’s operational areas will still get access to proper education in the midst of the pandemic.