The Indonesia Business Council for Sustainable Development (IBCSD) participated as partner for the Indonesia Development Forum (IDF) on 22-23 July 2019 at the Jakarta Convention Centre.  IDF is an international conference hosted by Ministry of National Development Planning (BAPPENAS). It provides a platform for development practitioners in the public, private, and non-profit sectors to meet and exchange ideas. The theme of IDF 2019 is “Mission Possible: Seizing the Opportunities of Future Work to Drive Inclusive Growth”. 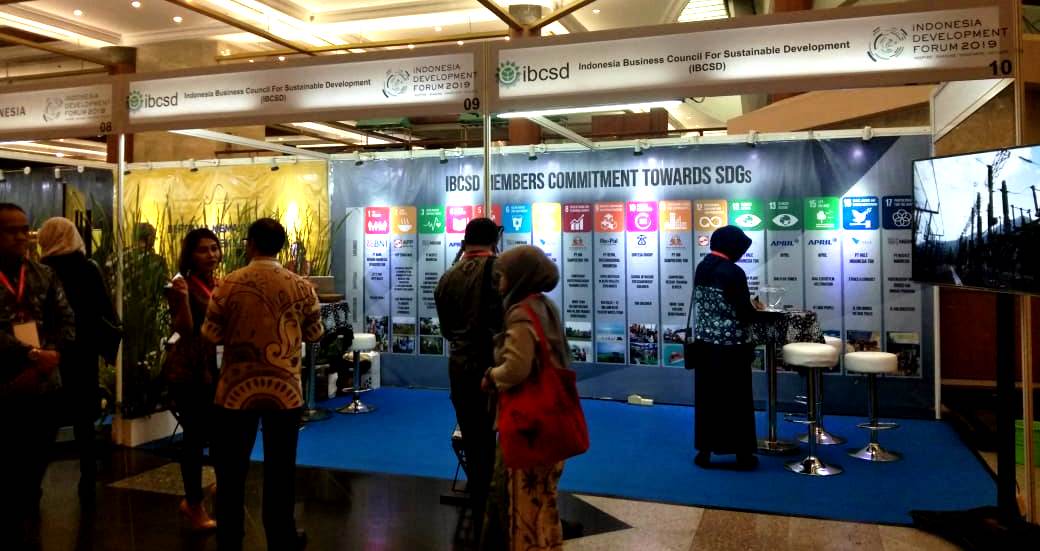 According to the IDF Committee, there were 2950 participants, 100 speakers at ideas and innovations marketplace sessions, 107 speakers at parallel sessions and 37 speakers at plenary sessions in the IDF 2019.

To showcase the IBCSD members commitment and actions on SDGs in Indonesia, the IBCSD set up booth during the IDF with title “IBCSD MEMBERS COMMITMENT TOWARDS SDGs”. Eight companies supported this booth and shared their programs and beneficiaries relating their concrete actions on the SDGs in Indonesia. These companies are BNI, APP Sinar Mas, PT Nestle Indonesia, APRIL, PT Vale Indonesia Tbk, PT HM Sampoerna Tbk, PT Repal Internasional Indonesia and Sintesa Group.

“It is great that the companies already take concrete actions and map their actions in relation to each goal of the SDGs in Indonesia. The government at both national and regional levels also needs to map their actions towards the achievement of each goal of the SDGs” said a visitor from BAPPENAS. Many participants from different institutions visited the IBCSD booth, including the Indonesian Vice President Jusuf Kalla that came for delivering IDF opening remarks. A number of visitors showed their interest to have further discussion with IBCSD  and to explore opportunities for potential future collaboration.

“Our Solutions Are in Nature”